What do you need to know about VM? It is just a virtual stacking machine, so when using it we are working with information that is on the stack. (Operations that occur there are of the following sort: Combine the two topmost numbers in the stack, or swap the 2nd position in the stack with the 10th). What is important:

The TVM code is standard data.

The code is simply stored on the chain and can be shared via messages and rewritten. There is a tvm.setcode(code) operation the will change your contract code for your subsequent transactions and even a tvm.setCurrentCode(code) operation that will apply the new code to the current transaction you are making. There are nuances to consider when updating a contract, for more on that see the “How to upgrade contracts” section of this tutorial.

In an asynchronous architecture, all communication between contracts occurs through sending messages.

The sequence is something like this ( I am not going to delve into the questions of how exactly messages are delivered here, there will be a separate chapter in the appendices that cover this):

But with internal messages, everything is more complicated. When a contract receives an internal message, a transaction is started. Logically, in most cases the calling contract should pay for the gas for this transaction type, and not the called contract. But at the same time, it is obvious that the calling contract must control exactly how much gas it is willing to pay. What further complicates things is that contracts can find themselves in different shards, and one shard cannot spend the money of another shard.

Therefore, in ES, all outgoing messages are appended with value ( ever-s ). When a contract receives a message, the gas is paid out of the money attached to this message, and if the money in the message runs out and the contract does not want to continue paying, then the transaction will run out of gas. If, after the transaction is completed, there is money left in the message, then it will be added to the contract’s account (or the contract can send the change back).

When you create a message, you have to show a flag which will determine where the money that gets attached to the message will come from and how the creation of the message will be paid for. The money can come from the contract account or be taken from money left over on the incoming message after the gas deduction.

value - this is the amount of money you want to transfer. (Essentially, this is just the amount of EVER we attach to an internal message and it doesn’t matter that this is a regular money transfer or a call of some kind of method of a smart contract.)

bounce - this is a flag that indicates whether we need to try to create a return message should an error occur during the processing of the message or there is no contract deployed on the destination address. By default, the flag will be true. If it is false, then, if there is an error, the money will just remain on the address.

flag - flags indicate how, from where and how much money is sent with a message. Read the description from the document below and I will provide further explanation.

When messages are created, two things occur: payment for the creation of the actual message (payment for validators so that they deliver the message), and payment of the value (funds) which will be attached to the message.

64 - This flag is used when processing an incoming internal message (when another contract calls you). You will most often use this flag with the value: 0. This indicates that for an outgoing message you have to attach the entire value that came with the incoming message, minus the spent gas. The creation of the outgoing message itself will also be paid for with the incoming money. This is a very important concept, in this paradigm other contracts do not spend money from your contract on calls. Below I will demonstrate a few simple examples.

Here are some examples of using flags. Contract A gets an Ext message from its owner and begins a message sequence, calling B and attaching 0.5 EVER to the message.

This is the basic pattern according to which ES works. Even though the price of gas doesn’t fluctuate, we don’t calculate down to the penny the exact amount you need to send to the contract so that you will have enough to cover the transaction. We just send a a decent amount and then send the remainder back. (We know that what we send will cover the fees because the price of gas won’t rise). Doing this, we can create long chains, by putting the contract address that initiated the whole chain in the call arguments and then returning the change to that address at the end.

All data in ES is stored and sent in a structure called the BoC (Bag of cell).

This is a confusing structure invented by Nikolai Durov, and it’s not very clear whether it was necessary in order to create the blockchain, or Nikolai over-engineered here.

The TVMCell is a structure that has 1023 Bits of data and 4 references to its child cells. A cell reference is the HASH of that cell.

With ES have have a singly connected graph, where each node can have 4 descendants. And we need to pack all smart contract data or messages into a cell with sub cells.

Thank God, by using Ton Solidty and knowing the interfaces of contracts, you don’t have to manually pack and unpack cells. The compiler will do everything for you. However, there are rare cases when you will have to do it yourself. In order to do this, there are special primitives in Solidity.

When this is necessary, you simply declare state variables in Solidity and read and write to them as usual. The compiler will pack and unpack everything in the BoC for you.

Some BoC properties to understand.

BoC is an acyclic graph. The link to a cell c is a hash of its data and its hash links to subcells. So we cannot create a cycle. (Because if we add a link from the parent cell to the child cell, then, by doing so, we recalculate all hashes from the changed cell to the root cell and the link to the parent cell changes).

The entire state of the contract is BoC. This is one cell with as many child cells as you like. Ton Solidity takes care of work with states for us, but you need to understand that, because of ES’s tree structure, we normally don’t write contracts with a lot of data. In order to illustrate how it works, consider (schematically) how a dictionary could be implemented in BoC. 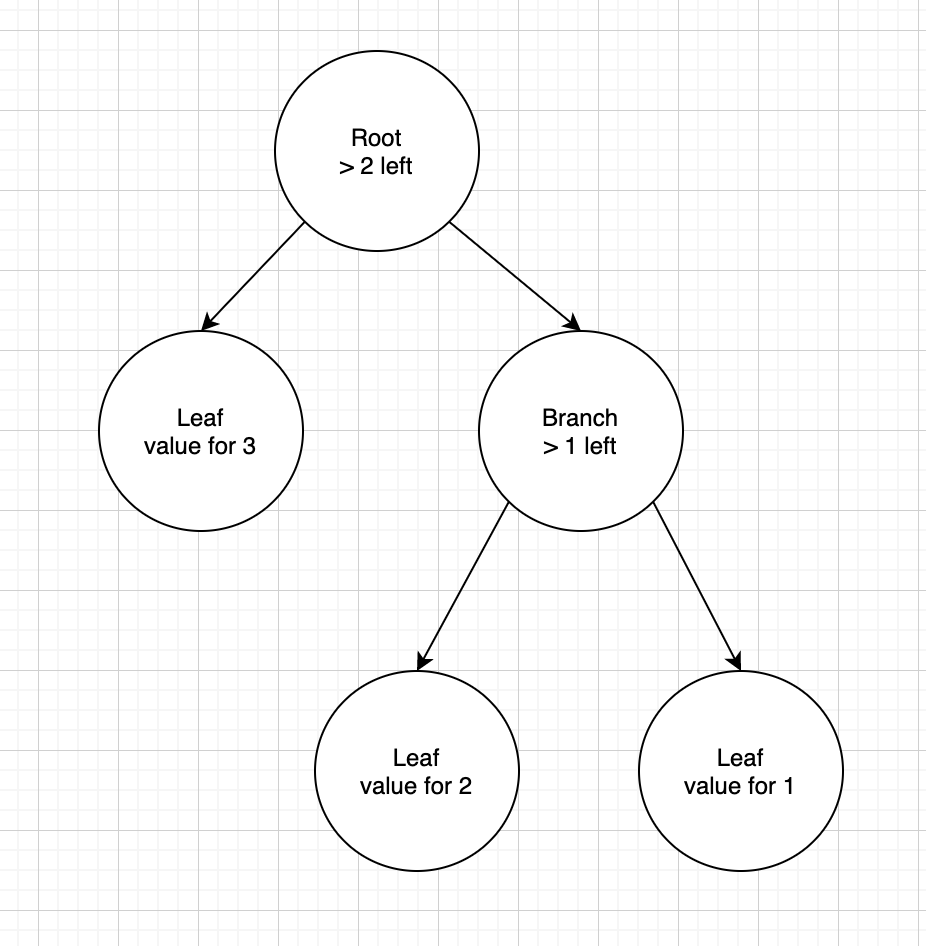 Each circle in the picture is a separate cell. To get the value by key 2, TVM needs to load a cell of depth 0, then depth 1 and then depth 2. We have to pay gas for each time a cell is loaded. And if we change the value by key two, we will need to recalculate all references from the cell with the value of the root cell because the cell reference is a hash (cell.data + cell.refs). So, links to all cells along the way will change and we will need to change them from bottom to top.

Now, if we are creating an ERC20 token, then the more owners this token has, the more expensive the gas will be to use this contract (the size of the owner-number map will grow). And although O(Log n) doesn’t sound scary at all, and the cost of working with the map will increase very, very slowly after the first hundred elements, and then even slower after that, in ES there we have a storage fee that grows linearly.

If you have accounts in your ERC-20 token that contain pennies, then the fees for holding these accounts will greatly exceed the value of these accounts over the years. Therefore, in ES it is customary to make separate contracts for separate accounts, which themselves pay for their storage. We will look at how the TIP-3 standard (a distributed replacement for ERC-20) works in the next chapter.